Surprise, surprise - we're still here!  This is a very short blog just to bring you up to speed!

I am very sorry that there has been no activity on the blog since the beginning of September, the simple fact is that we arrived in Huddersfield, moored up in Aspley Marina and basically hit the floor running and haven't stopped since!  Its been a constant flow of visitors; visiting; dining out; parties; Christmas; New Year, etc etc  We are back in our hometown, the one we left in 1985 when we moved to Scotland.  After 5 years in Scotland we moved to Port Stewart on the North West Coast of Northern Ireland and two years later we moved to Cambridge, where we remained until 2008 when we moved aboard our narrowboat, Lady Arwen.  All through the years we have only ever made flying visits to Huddersfield for one or maybe two nights at the most.  Those of you who have followed our blog from the beginning will know that our maiden voyage back in September 2008 brought us to Huddersfield and we stayed here in the marina for two weeks.  That was a great opportunity to catch up with family and old friends.  We have been doing the same since arriving here on September 26th 2011.  It has been really great to just hop on a bus and go and visit Clive's parents and other family members and we have had lots of visitors to the boat as well.

We had a lovely time at Christmas with the whole of Clive's family - I cooked Christmas dinner for 13 of us at Clive's parents' house and it all went down very well apart from the fact that I was not very well, I had a shocking cough and would have been better staying in bed all day!  The other thing that made Christmas great was that our six year old granddaughter, Indy, flew over from Colorado Springs to spend two weeks with us, which was lovely.

I said this was to be a short blog and I mean it, it is just to let you all know that we are still afloat and alive and kicking but I will resume the blog in a few weeks time when we finally leave Huddersfield and set off on our travels once more, probably some time mid March when all the Winter stoppages on the canal system have reopened.  Our intention is to head onto the Leeds Liverpool canal, make our way to Leeds, then we wil negotiate the Bingley Five Rise (a big lock flight!) and on up to Skipton, the furthest North we will have reached by boat!  After that we will head West and hope to reach Liverpool!  After that - well we don't really know, we haven't planned that far ahead!

One little snippet of news is that we currently have a ship's dog!  Well a borrowed one really!  Her name is Jesh, she is a Wesh Terrier and belongs to a lovely lady, our great friend, Pat Britton, the mother of Lindsey and Philippa, our pals in New Zealand.  Pat is currently in New Zealand visiting her daughters and had left her dog with a good friend of hers who unfortunately fell and broke her hip whist on a shopping trip to Huddersfield!  Needless to say she couldn't care for Jesh whilst recovering so we offered to have her on board.  She is an absolute sweetie and we are really enjoying having her on board.  She has taken to the role of ship's dog admirably, though it is not the first time she has been aboard, Lindsey and Pat came to stay with us in August 2010 and Jesh came too.  The only problem we have is that she is very uncommunicative - she doesn't bark, at all!  (That's a lie - she actualy barks in her sleep when she's dreaming but never when she is awake!)  So knowing when she wants a pee is all down to guesswork and reading her body language or basically just taking her out every 3 or 4 hours!  Other than that she has been no bother whatsoever.  We are really going to miss her when Pat gets home at the beginning of March so I am hoping to persuade Cap'n Clive to let us have a ship's dog of our own - watch this space! 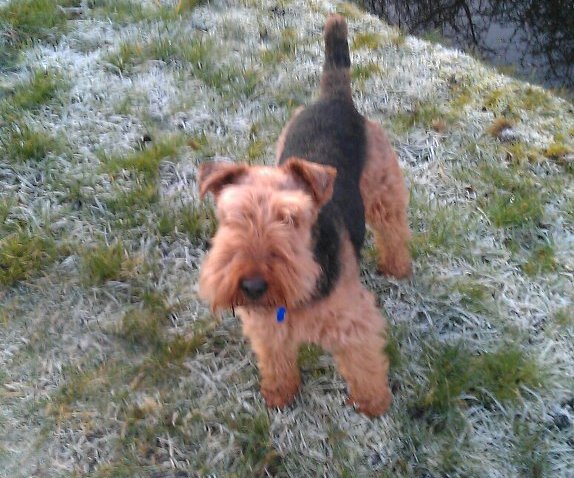 We have two family birthdays this week, our son Gareth  will be 32 on Wednesday then on Thursday it is Clive's birthday but his is a special one, its got a nought at the end!!  Yes Clive is going to be 60 and he was really looking forward to getting his bus pass but unfortunately the Government have moved the goal posts and he won't now get it until he is 63 - how mean is that!  We are having a family party on Saturday to celebrate this milestone and will be dancing the night away to the sounds of the 60s - very appropriate don't you think!

On a sad note, one of our good friends from Cambridge and an avid blog follower, Moyra Borg, lost her battle with cancer on Saturday, 21st January, 2012, aged 49 years.  She was a lovely lady, a fellow musician who regularlyt attended our Friday folk club and was kindness itself, she would help absolutely everyone and was much loved by us all.  This photograph was taken only a short time prior to her death on a visit to Addenbrooke's Hospital in Cambridge for some treatment but it sums her up perfectly, she always had a smile and a wave for everyone regardless of how she was feeling.  RIP Moyra, you will be sadly missed. xx

Right, well that is all for now folks.  As I said earlier, the blog will resume on a more regular basis once we have set off on our travels again.