Well folks we are finally off on our travels once more!  As I promised in the last one I am going to start posting a regular blog from now on.

Just to fill you in on the last few weeks, Clive celebrated his 60th birthday in style with a lovely party attended by family and friends, some of whom travelled quite a distance to be there.  For example Heather and Les drove over from Nantwich, Josie and Chris from Liverpool, Shirley and Barry from Cranfield, Bedfordshire and of course our daughter Vicki and fiancee Ben who drove up from Grantham - it was great to see them all.  The highlight of the evening was when I presented Clive with his special birthday cake and when I say special I really mean that.  A friend of my sister Thelma made the cake in the likeness of our narrowboat Lady Arwen, which had just crashed into a low bridge!  It is brilliant, right down to the mushrooms and the solar panels on the roof, see for yourself!  It was delicious too! 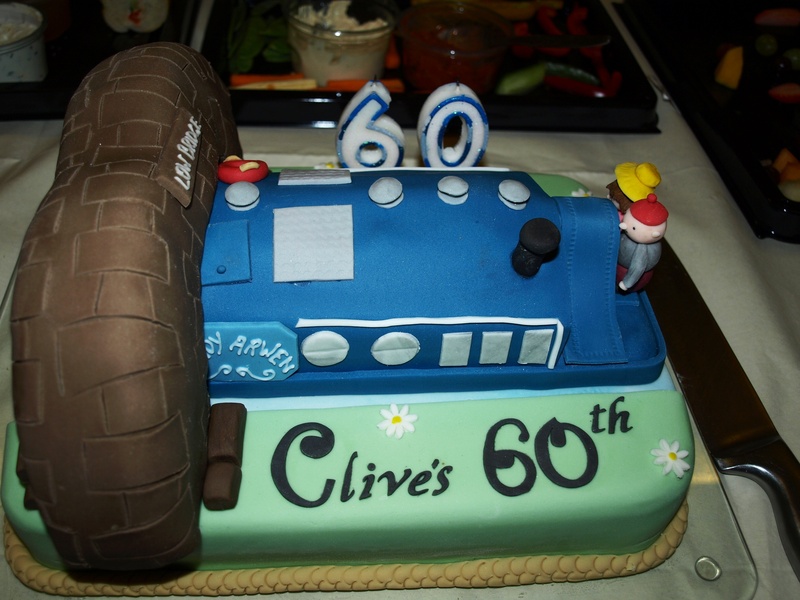 Unfortunately at the beginning of March we had part company with our borrowed ship's dog, Jesh, when her mum Pat Britton returned home from New Zealand.  We were very happy indeed to see Pat again but rather wistful when she took Jesh away with her! 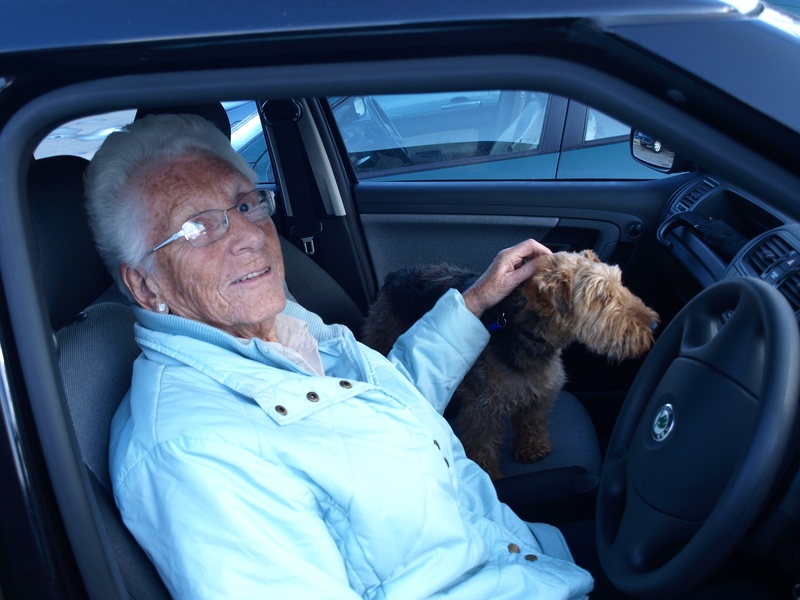 Fortunately Pat has been back to visit us a couple of times since and she did bring Jesh with her as well.  Jesh just made herself at home as if she had never left!

On another sad note, my lovely Auntie Dorothy, my mum's sister, passed away a couple of weeks ago. 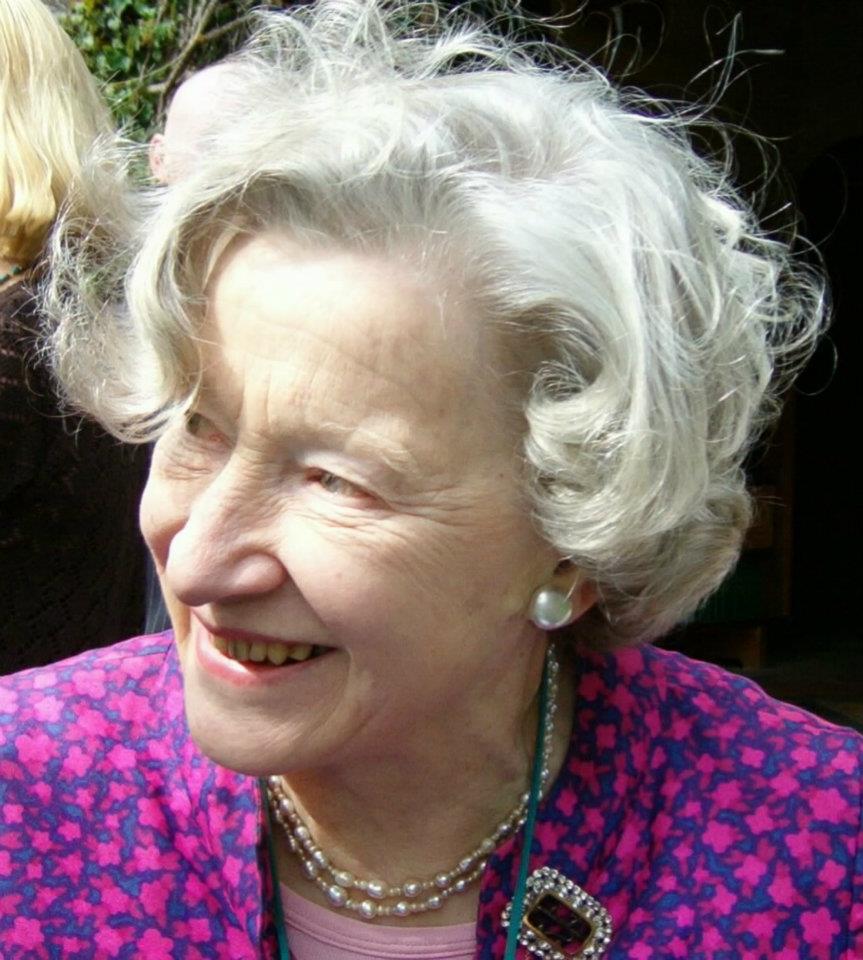 She had lived in Africa for most of her life since marrying her husband Robert "Beau" Mason, whom she met whilst she was in the Land Army during the war.  He whisked her away from Blighty when she was only 22.  She has a lovely family, my cousins, Charlotte, Chloe and Robert.  The girls still live in Africa, Chloe in Johannesberg and Charlotte in Zambia but they both came over for the funeral.  Clive and I and my brother and sister, Nicholas and Thelma, flew over to Jersey on Monday morning, the funeral was on Tuesday morning.  It was a beautiful day and she had a lovely send off.  Although it was a sad occasion it was also really wonderful to be with our cousins again.  We haven't all been together since we were children when the whole family came back to England for a few months, several of which they spent at our house in Huddersfield. 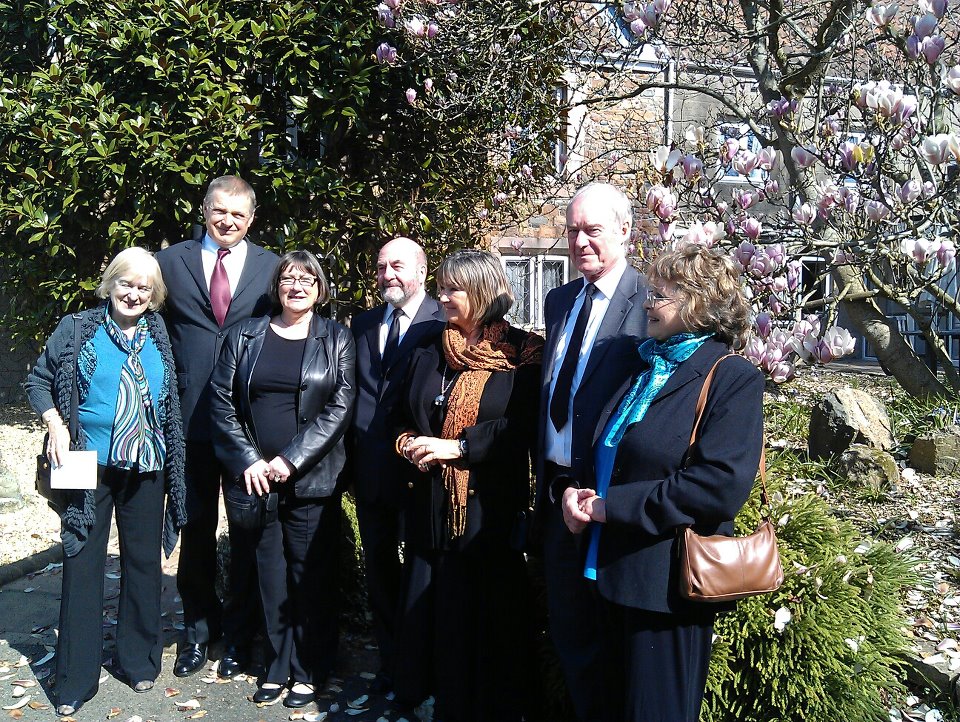 We also had chance to explore a bit of Jersey.  Rob very kindly drove us all over the place showing us various places of interest and we went for a lovely walk along a headland and enjoyed a lovely sunset on the way back.  We flew back to England on Wednesday morning.  Goodness knows when we will see our cousins again, maybe individually but it is unlikely we will ever all be together again.

Once back we had to start planning our departure from Aspley Marina.  We did manage to do a bit of Spring cleaning!  We took the boat over to the service station at the other side of the marina and Clive managed to shampoo and rinse one side of the boat then he turned her around and did the other side too.  I in the meantime emptied absolutely everything out of the cratch onto the bank and when it was completely empty Clive hosed it all down and gave it a good scrub, which was desperately needed.  All through the winter months, whilst we have been in the marina, we had nowhere to put the hot ashes from the stove so I purchased a couple of big tinfoil turkey roasting tins and we used these to deposit the ash in until it had cooled sufficiently to decant into an empty coal bag to be disposed of in the bin.  The problem was that the hot ash had a habit of puffing into the air inside the cratch and coated everything with a gritty layer - nothing escaped it and it was a right mess!  We felt much better after it was all shipshape and Bristol fashion again.

On Saturday morning we moved the boat out of her winter berth and cruised around the marina to fill up with diesel, water and have a pump-out.  We bought some more coal and a few other bits and pieces, settled our bill, handed back the car park permit and the gate key and then we moved the boat about a hundred yards down the canal and moored up again!  The reason for this is that we had another 60th birthday party to attend in the afternoon, Clive's old school pal, John Greenwood's.  Our friends Martyn and Cani (John is Martyn's cousin) kindly gave us a lift to the party and we had a really lovely time, it was good to meet up with everyone again.  Afterwards Martyn and Cani dropped us off at Clive's parents' house so we could say our goodbyes to them (I don't think Mum really wants us to leave at all!) .

Finally, Sunday morning dawned and it was time to leave at last.  We had a very good send off indeed from my sister Thelma and her family - Nick, Sam, Jamie, Molly and Daniel.  In fact Molly came to help me lift the Locomotive Bridge (she turned the key and pressed the button) and once we were through we headed off down the canal with two stowaways - Thelma and Jamie!  Jamie was very helpful indeed at the locks, he helped me to open the gates and also to put the paddles down once the boat was out of the lock.  They did several locks with us and then we arrived at one lock where Nick was waiting for us to arrive.  Jamie once again helped me with the lock and then it was time to say goodbye.  Clive and I carried on down the canal without any bother apart from one pound (stretch of water between locks) which was extremely low, Clive had to guide the boat very carefully down the middle of the channel to avoid getting beached, it got quite hairy at one point!  However he made it through  and we were on our way again.  We stopped in one lock to have a sandwich and a cuppa before continuing on our way .  Finally we arrived at a lock which took us from the Huddersfield Broad Canal onto the River Calder followed by a very sharp right turn, through a flood lock (which was open) and onto the Calder and Hebble Canal at Cooper Bridge.  By the time we arrived it was 3.30pm and we decided enough was enough for our first day, don't want to overdo it!  So we moored up on the very pleasant visitor moorings and after months of being in the marina, flanked by two boats, looking at a pub out of the front window and a carpark and the ringroad to the rear it was bliss - grass, trees and birds singing overhead, lovely! 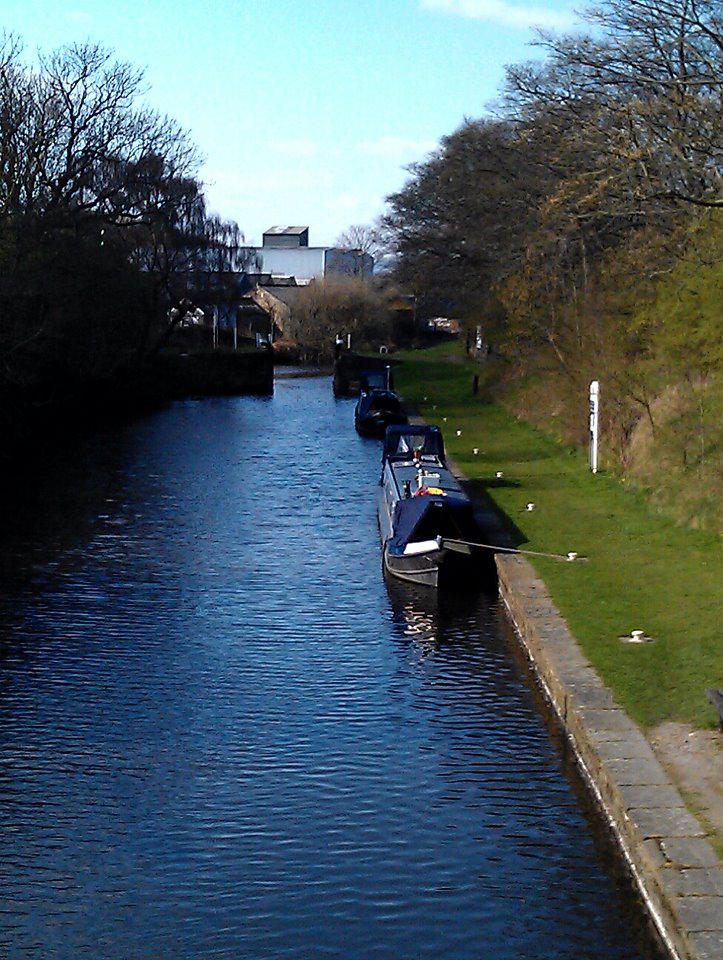 We have arranged to meet up with Martyn and Cani again on Tuesday evening as hopefully we should be able to moor up very close to where they live in Mirfield, so we have decided to stay put until tomorrow before cruising down there.  I am very glad actually, I woke up this morning feeling extremely stiff, battered and bruised from all yesterday's locking - I'm out of practice, been getting fat and lazy for the last six months in the marina with no work to do!  So I am very happy to have a day to recover!

So that's all folks for now.