Well there I was completely up to date with the blog and we go and enter an internet black hole and now I'm a day behind again! Meh!

February 18th – We had a lovely surprise last night, just after I had finished posting the blog! The cloud had llifted and we had a wonderful view of Mt Tasman and Mt Cook peeping out from behind some of the closer, tree-clad mountains.  They looked lovely with the sun gleaming on their snowy peaks.

We also had a bit of a disappointment thought, we heard the weather forecast – it was going to rain overnight and throughout the day!  Ah well, we really can’t complain, we’ve been so lucky, wall to wall sunshine since we arrived in South Island really, apart from rain one night, which had all disappeared by the following morning.  The trees and plants need water so I guess we will just have to put up with a bit of rain!

However, surprise, surprise, we woke up this morning – no rain!  It was a bit cloudy and overcast but it was fine!  We decided to go and see the Fox Glacier after all.  So as soon as we had finished breakfast and washed up we headed off back into the township.  First stop was the Department of Conservation (DOC) Office for some information. Throughout South Island there are “wild” campsites.  These are places where you can stay overnight for about $7, unlike the $30-$40 we normally pay.  The difference is there is no electric hook-up and very little in the way of facilities, usually just a loo!  You must leave the place exactly as you find it, leave nothing behind, including grey water eg washing up water!  We quite fancy staying out in the wilderness so to speak, if for no other reason than it will be totally dark – I have taken to wearing a mask that I got on the plane as the campsites tend to be brightly lit, especially if your pitch is near the toilet and shower blocks as the lights stay on all night!  We got a little book showing all the DOC campsites and what facilities they have.  We also stopped off at the local shop and bought a couple of ice packs that we can freeze as we are travelling then they will help to keep the fridge cold overnight in case the battery power runs out!

Next stop, Fox Glacier! We parked the car, donned our boots and slathered ourselves with Bushman Plus, a very efficient insect repellent!  If the sandflies were bad up North they are a hell of a lot worse down here and three times as big!  Once prepared we headed off to see the glacier.  It was only a short trek, about half an hour each way.  Before we even reached the glacier we were awed by the valley we were walking through.  This valley would once have been full of ice, before the glacier retreated.  The cliffs were absolutely stunning!  Soooooooooooo huge!  To give you some persepective, look closely at this photograph and you will see the people walking along the valley floor! 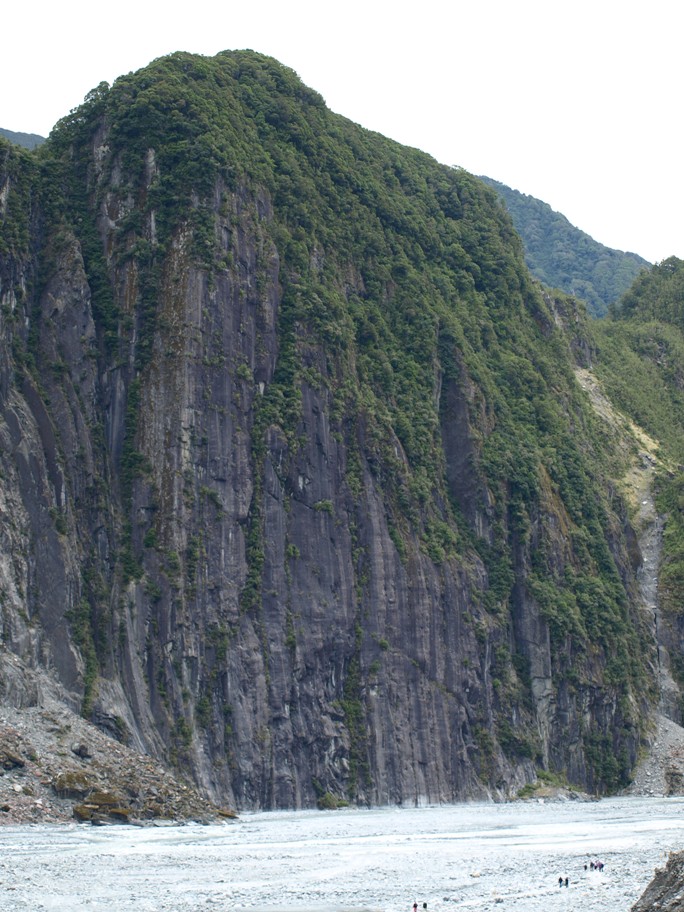 As you can see, the valley floor, which still has a river running through it, is totally flat!  Finally we came in sight of the glacier, it looked quite similar to the Franz Josef but because this one goes around a bend you can’t really see all of it at once. The terminal point or “nose” looked very similar with a cave-like entrance where the river flows out from under the glacier. 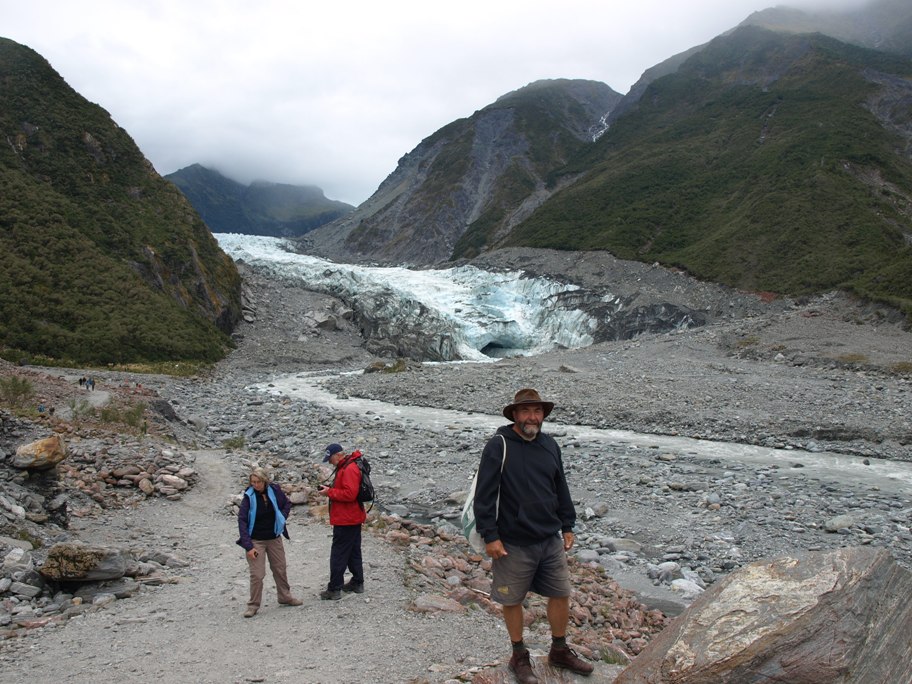 However because we were able to get so much closer to this one we could see the sides as well, which are very interesting because you can see all the layers and contours in the ice. 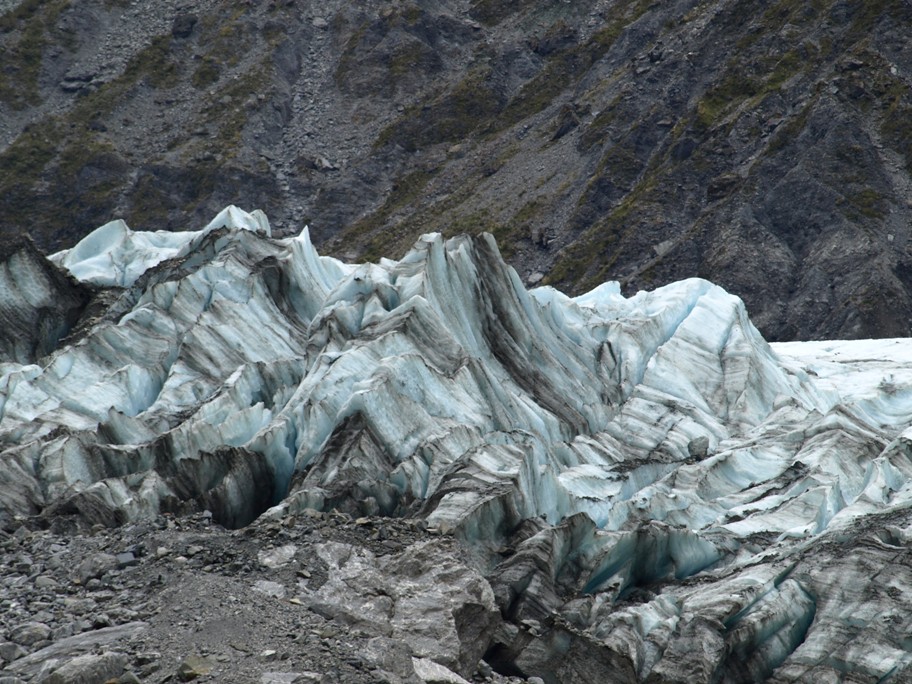 We got as close as the barriers would allow.  These are put there for your safety and some tourists who ignored the warnings and went through the barriers to get close to the ice have been killed by huge blocks of ice falling off the glacier and crushing them!  Also the river running out of the glacier sometimes surges and evidently people have been caught unawares and swept away in the past!

Time was passing and we still had quite a drive ahead of us so we tore ourselves away and headed back to the van. On the way Clive spotted something moving amongst the rocks on the side of the path – I quickly took some photos but the damn thing wouldn’t keep still, finally it stopped briefly and I got the clearest shot I could manage.  It was a Wolf Spider, which at first we thought was just hairy but on closer inspection we saw it was carrying hundreds of babies on its back! 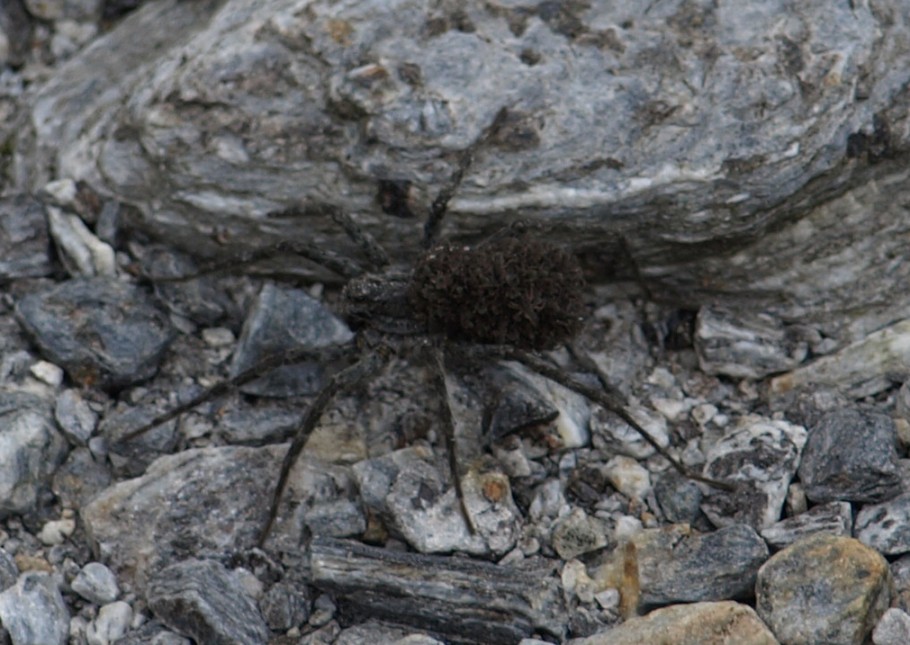 We returned to the van and set off again, this time heading for Haast.  Soon after we set off it started to drizzle!  Once again we had been really lucky that it hadn’t come sooner and spoiled our trip to the glacier. The journey to Haast was fairly uneventful and took us about three hours.  At one point though we realised just how eventful it could have been!  We saw a sign showing that there was a diversion ahead and sure enough the road suddenly veered off to the right but not before we saw what was ahead on the original route – a huge rockfall with massive boulders the size of cars littering the road – that could really ruin your day if you happened to be driving past when it happened!!

We didn’t actually stop in Haast itself but continued on to a campsite at Haast Beach, though we didn’t actually see the beach either!  It was very dull and overcast when we arrived and we didn’t really feel like going anywhere.  There was a TV lounge cum kitchen/dining room with comfy settees available so we spent a couple of hours in there just chilling. Interestingly a large party arrived, all on bicycles and set up their tents in the middle of the campsite, there was a van accompanying them which carried all their gear.  A couple of the guys came in to make a huge dinner for them all – we think they were Russian!

During the night it rained. Once again I had to get up for pee in the night and it was quite drizzly, I got back into bed slightly damp!

February 19th – when we woke up this morning the rain had stopped luckily but it was a bit damp underfoot.  The cloud had also lifted and we could see mountains, we hadn't even realised they were there! 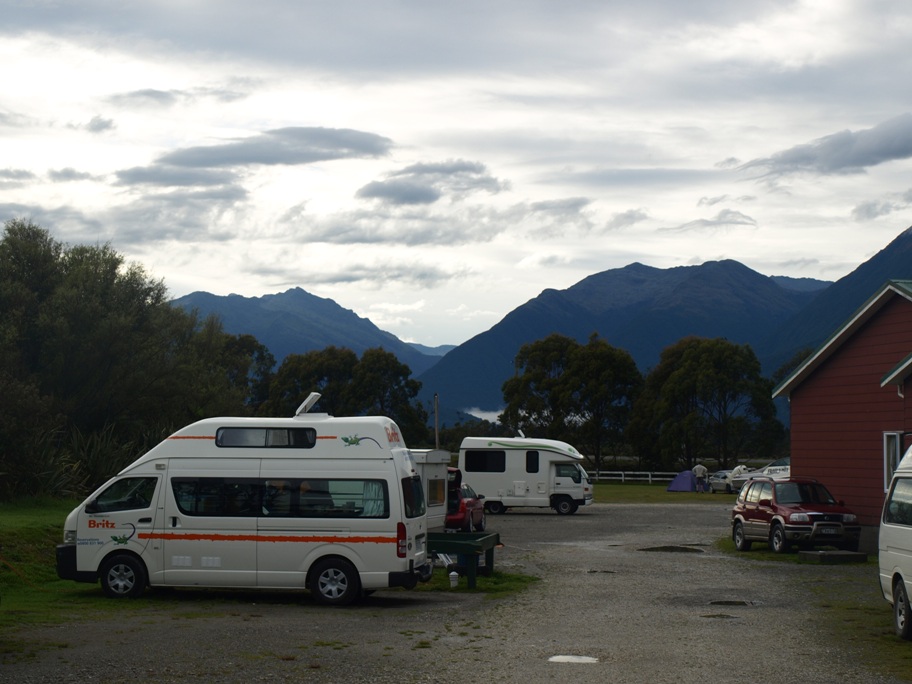 I went into the kitchen to wash the breakfast pots and ended up chatting to a nice Maori lady.  She was admiring my Pounami (Greenstone) Koru necklace and told me that she was going up into Haast township later to see if she could buy a necklace for her son.  Evidently when a Maori boy reaches 21 he is given his first Pounami necklace, just a lozenge shaped drop, which evidently signifies his power and masculinity.  Her son is going to be 21 in August!  She also told me that her father was a pilot during the war and flew Lancaster bombers. He was based in Scarborough!  He lodged with a Yorkshire couple whilst he was stationed there and they became lifelong friends.  They used to come out to New Zealand for six months each year until they were too old to travel, she and all her 7 siblings knew them as Nan and Pop!  Sadly her father and Nan and Pop too have all passed away now.

We left Haast Beach, having never seen the beach at all and headed back to the highway.  We noticed that all the trees and shrubs along the roadside had been bent at an angle bythe strong sea winds, they looked almost as if they had been neatly clipped into strange shapes, wind topiary maybe! We also spotted this strange looking tree that looks as if its wearing a wrinkly leg warmer! 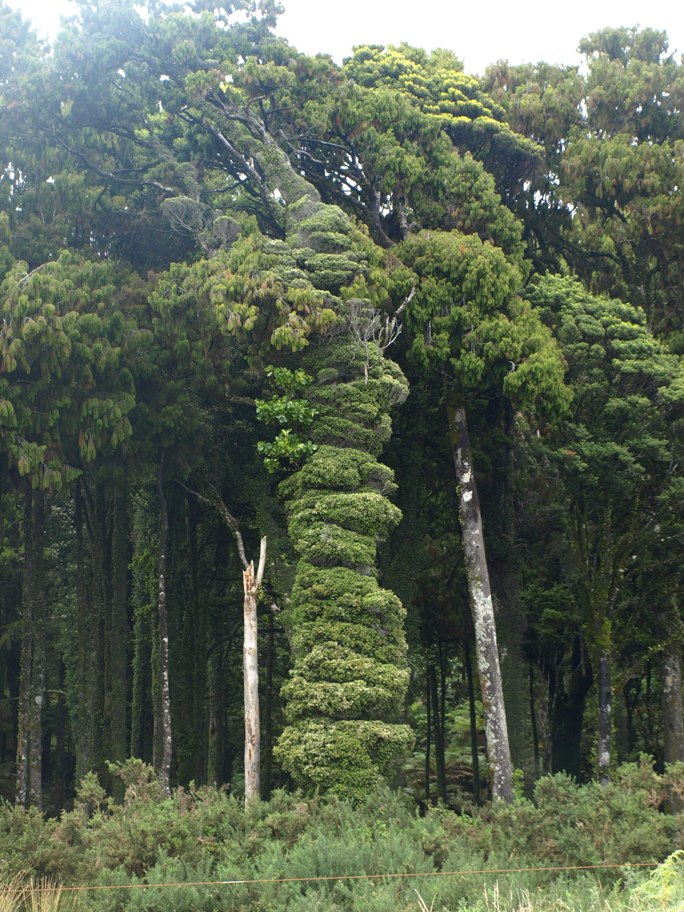 Our journey today took us through some spectacular scenery; lakes and mountains, tumbling waterfalls, huge gorges and vast river beds - you name it we saw it!  I took lots of pictures out of the window and some were better than others!

We finally reach Lake Wanaka and the road followed her East shore for quite a while.  We had spectacular views over the lake but unfortunately as it was so overcast the photos don’t do it justice.  We stopped off in a gravelled area to make some lunch and have a cuppa before continuing on our way.  A short time later the road veered away from the lake but in only a few minutes we were travelling down the West shore of another lake, Lake Hawea.  This lake was even more spectacular than Lake Wanaka and we could see the mountains in the distance, if only it had been a sunny day it would have been absolutely stunning!  Clive pulled over at a view point so that I could get a decent photo. 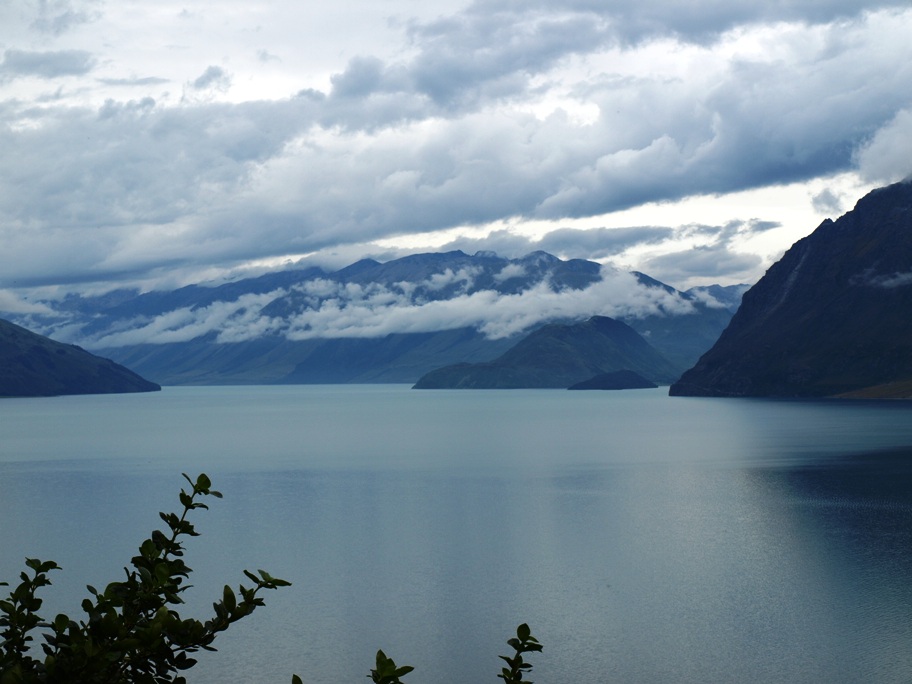 At around 3.30pm we arrived on the outskirts of Waneka.  Clive had read in one of our brochures that there was a Fighter Pilot Museum located at the airport so we took a detour up the road towards Queenstown for about 7km to go and have a look.  It was a very interesting museum with lots of personal stories, photos and artefacts from both the great wars.  We were very interested to learn that a lot of the NZ pilots were actually in the Fleet Air Arm, as was our great friend Britt, Lindsey and Phillipa’s father.  He used to fly Corsairs back in WWII and many of the NZ pilots flew in them too.  We had a coffee and a bun in the museum café and watched the small planes taking off and landing on the small air strip then we jumped back in the van and headed for Waneka.  We had a drive around the town then parked the van and went to look around the shops plus popped into a local  supermarket to pick up a few staples.  Then we set off to find a campsite.  It didn’t take long, there was a Top 10 just outside town. We have decided to have a take-away tonight so are going to nip back into town as soon as I have finished this to pick up dinner!

We are heading for Queenstown tomorrow, all being well!  We are keeping our fingers crossed that the weather improves, it would be lovely if the sun came out and we could see the tops of the mountains!