This is the second attempt!  I sat for nearly two hours last night doing this blog, first typing it in word then transferring it onto the website and downloading all the photographs, just as I was editing the very last photograph I must have some how hit a key combination which suddenly took me to a different page, I clicked "back" but it had all gone!!!  I was pretty miserable I can tell you, had to walk away and leave it, couldn't face doing it all again last night so now, here goes again!!  Thank goodness I do at least have the Word doc to transfer, at least that was saved!!

February 19th 2011 – We had our Chinese takeaway last night, it was OK but we’ve certainly had better!  Anyway, it made a change from salad.

The clouds had lifted by the time we got up this morning and the tops of the mountains had come into view. Clive nipped out to take a photo before we packed up to leave. 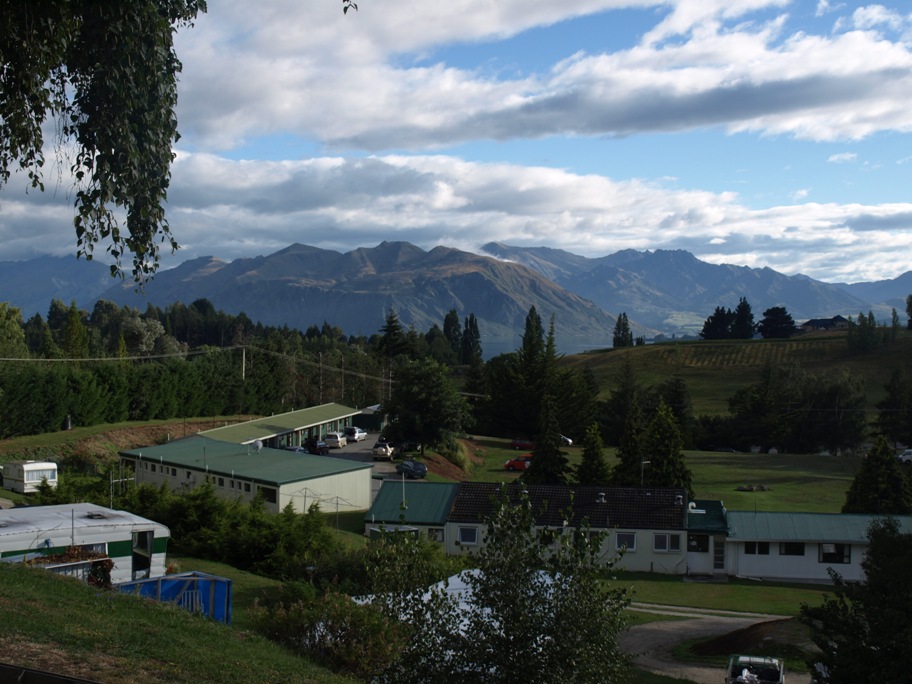 We drove back down to the lakeside and stopped to get a few pics of the lake before heading off on the road to Queenstown.  We had decided to take the scenic route rather than driving down the main highway, there was a special reason for this – its Lord of the Rings country!  We got a wonderful Christmas present from Lindsey, The Lord of the Rings Location Guidebook!  What better present could two avid LOTR fans get!  This book showed us that several of the locations used in the film were not far from Queenstown and we really wanted to go and have a look at one of them in particular, The River Anduin aka The Kawarau River to most Kiwis!

The road was quite a long way up as we came through the mountains and there was a viewpoint where we could look down and see Queenstown way in the distance and a long way below! So, we had to descend! The road was quite steep and at one point we could definitely smell hot brakes!  Clive slowed right down to a crawl using the engine as a brake and that helped a lot. At one point we could see the road below us, descending in a series of hairpin bends! 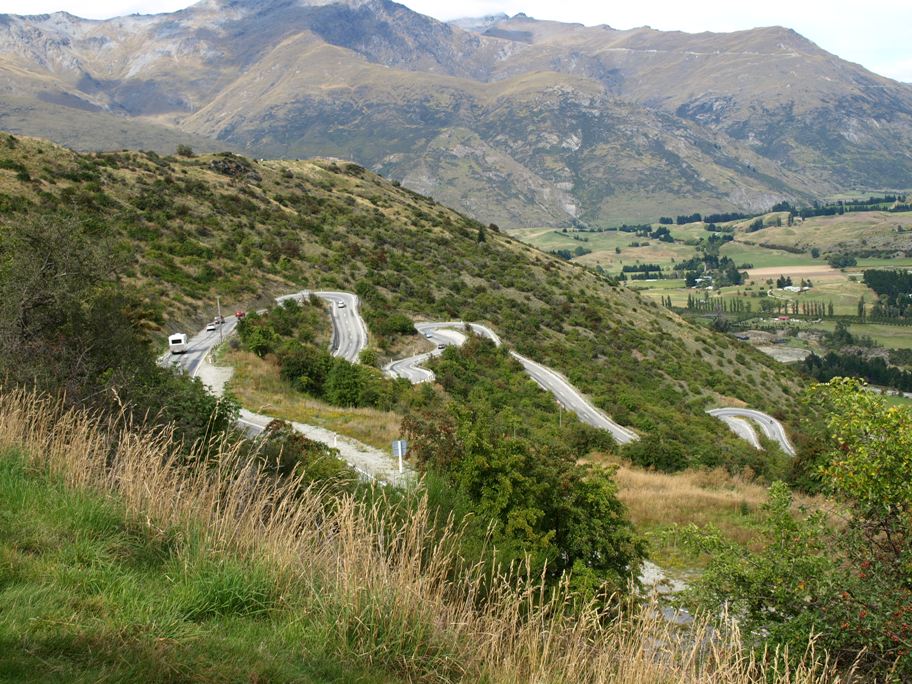 Finally we reached the bottom and turned left, following the directions in the location guide book. The Kawarau river runs through a deep gorge and over it is a suspension bridge from where you can do a Bungy jump (if you so desire!) from A J Hackett’s Bungy. 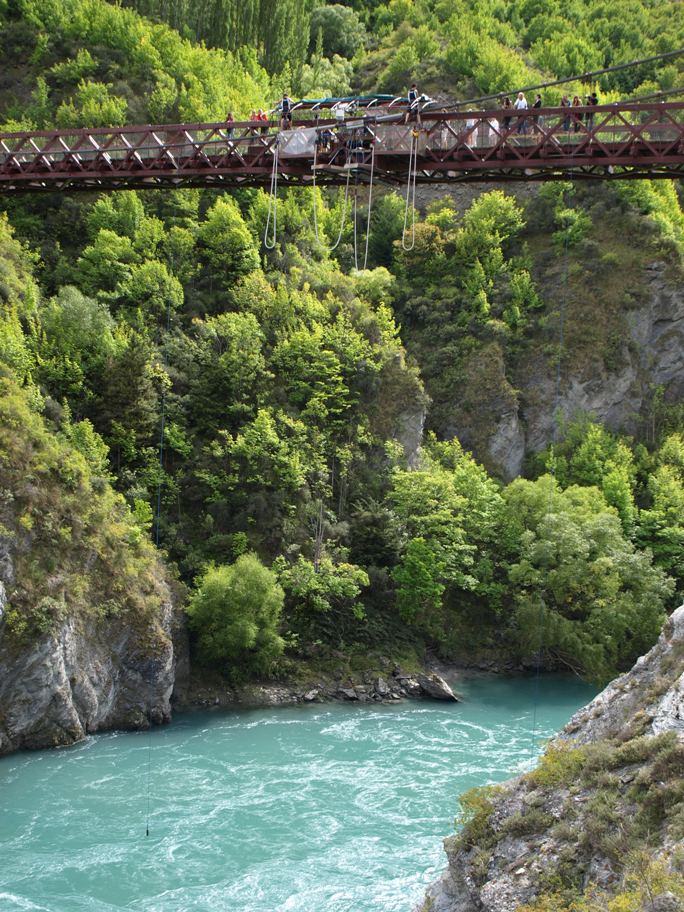 A J Hackett's Bungy over the Kawarau River

A J Hackett and a mate, speed skier, Henry Van Asch, invented the modern bungy and this strange custom has of course now spread all over the world but the idea originated on the island of Vanuatu where a huge wooden tower was built and young men with vines tied round their ankles would leap off this structure as a rite of passage into manhood.  I remember seeing footage of this feat when I was a youngster at home watching documentaries on the TV!  Anyway we thought we would check it out, seeing as we were passing!  When we arrived there were some young people already signed up to leap from the bungy so we decided to stay and watch!  Personally I think they are all quite mad but heyho, whatever presses your buttons!!  We watched about five people do the leap, including one young lady.  I have to say all the guys yelled and screamed as they jumped but the young lady was as quiet as a mouse, not even a squeak! 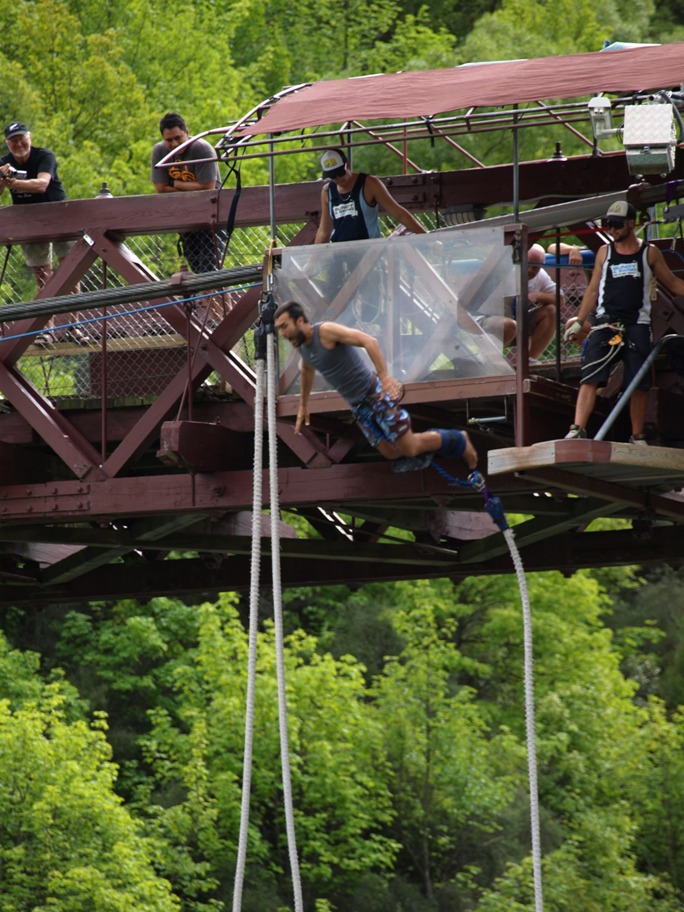 There is one particular scene in the LOTR film when the fellowship travel down the River Anduin in beautiful Elvish boats and they pass through the Pillars of the Kings, The Argonath, which are vast stone statues of two kings, one on either side of the river.  These of course were computer generated in the film onto the real walls of the Kawarau Gorge.  We wanted to see the spot so we again followed the directions.  Right opposite the exit from the Bungy car park is a little gravel road climbing quite steeply up a hillside, it is the road to Chard Farm Vineyard but also has a birds eye view of “The River Anduin” and the spot where the Pillars of the Kings was located.  Even if you are not a Rings fan the view is awesome!  To us it was just magical. 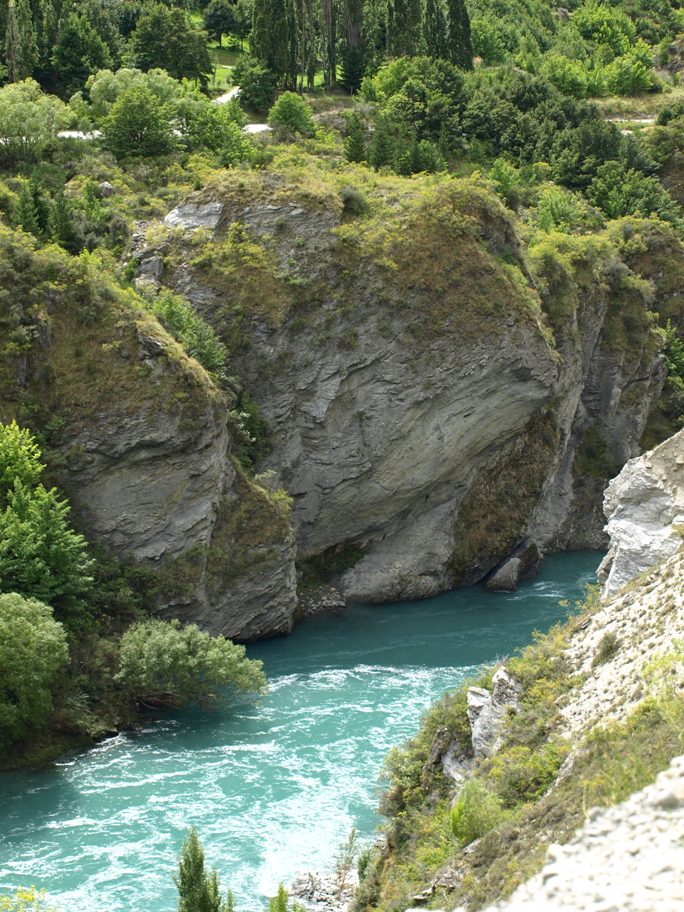 Location for The Argonath, The Pillars of the Kings

After taking loads of photos of this fantastic river and gorge we drove back down to the main road and set off in the direction of Queenstown again.  We took another little detour though, just before Queenstown is a little place called Arrowtown.  This place was also used as the location for the Fords of Bruinen, or at least for part of the scene anyway.  The ford itself is tucked away at the back of Arrowtown but other shots from the Fords of Bruinen which entailed high cliffs and a huge wall of computer generated water were actually shot elsewhere in New Zealand.  We didn’t see the spot where it was filmed but Arrowtown was worth a visit anyway, its lovely!  It is actually the site of an old gold mining village.  Gold was first discovered here in 1862 and it turned out to be one of the world’s richest gold bearing areas!  Over 7000 Europeans and Chinese came to try and make their fortune.  This wasn’t gold mining in the normal sense though, this was alluvial gold and you find it by “panning” in the river.   Today Arrowtown is a tourist haven.  All the little old miner’s cottages have been revamped and turned into shops, restaurants and pubs etc.  It is very pretty indeed. We did actually spot one young lade with a frying pan and a trowel trying her hand at panning though! 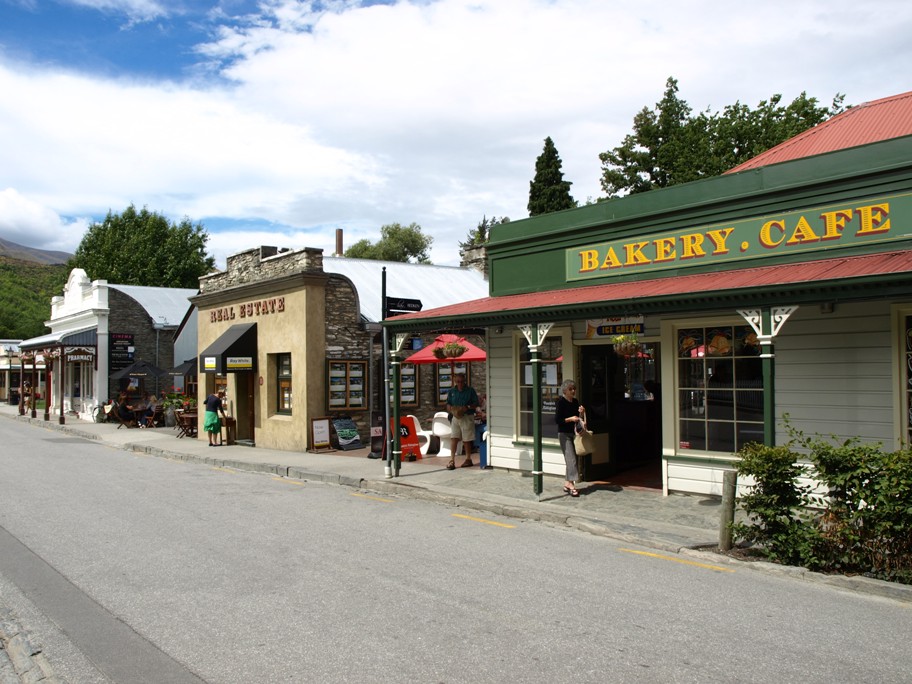 We found a pub called The Tap, had drink and shared a burger and chips! Well we only wanted a snack and they were huge, plenty for two!  After another wander around this charming place we got back in the van and headed into Queenstown.   We have been looking forward to getting here for a while as we have had many good reports about this amazing place.  First of all our daughter Vicki came here back in July 1999.  She was supposed to be “touring” New Zealand but when she arrived in Queenstown she took root and wouldn’t budge, she loved it so much! She was here for over three months!! Queenstown is the adventure capital of the world, every extreme sport imaginable is done here and if it isn’t its not worth doing!  There is the inevitable bungy, this time from a platform over a forest!!  There is Skiing, Jetboating along the Shotover River, Skydiving, Mountain Biking, White Water Rafting – need I go on?  Well we aren’t doing any of those things I can tell you, call us boring old farts ifyou will!  We may possibly take the gondola ride up to the top of one of mountains, where the forest bungy is!  Regardless of all that, Queenstown is also a really great place to be.  It has a lovely atmosphere, a sort of cross between Windermere and Chamonix!  It has a definite alpine feel about it and is absolutely stuffed to the gills with young people, mostly backpackers!  The best thing about Queenstown though is it slocation, nestled on the side of Lake Wakatipu surrounded by a range of mountains, The Remarkables,  which are quite remarkable!!  Of course when Vicki was here it was winter and they were all covered in snow, at the moment they are quite naked! 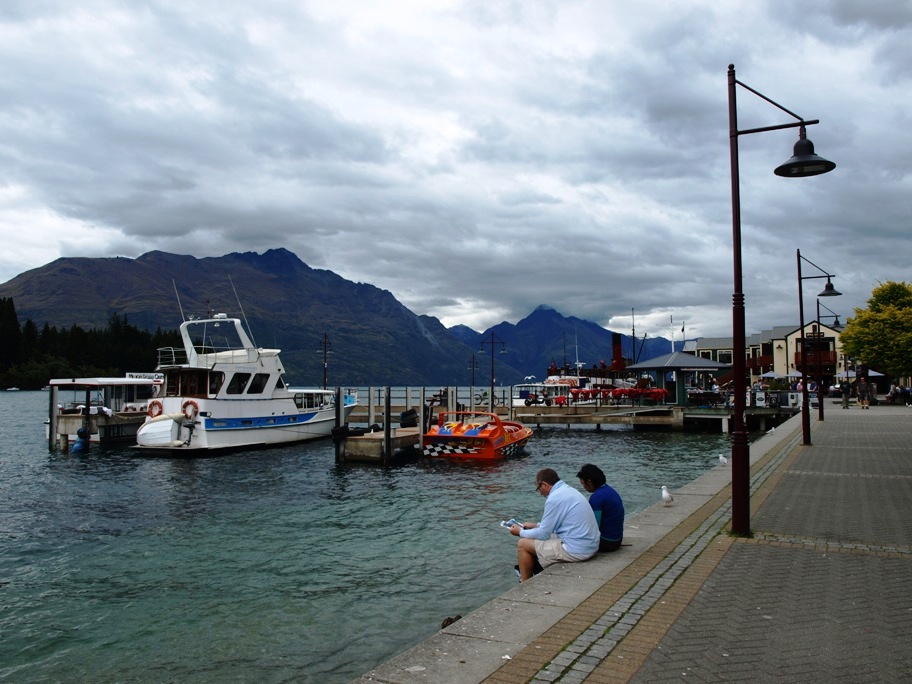 Lakefront, Queenstown with The Remarkables in the background

Unfortunately this photograph does not do it justice but it was very overcast and gloomy.  We parked the van and walked into the centre of town where we found a bar with live entertainment, a couple of young guys on guitars doing mainly American country stuff, they were quite good.  There wasn’t much room so we asked a couple if they would mind us joining them at their table.  They turned out to be holidaying here from America, they hail from Kansas!  We had a good old chinwag then said goodbye and headed back to the van.  We found a leaflet stuck in the windscreen wipers when we got back, advertising a new campsite in Queenstown but we had already decided to try a Dept of Conservation Wilderness Camp tonight instead of a normal campsite.  There was one about 6km outside Queenstown at a place called Moke Lake. We soon found the turn off and ended up on a gravel road heading out into the middle of nowhere!  Finally after a rather bumpy journey we arrived at the campsite, it was lovely!  A small lake surrounded by mountains and a few tents and campervans parked on the shore and one “dunny”! 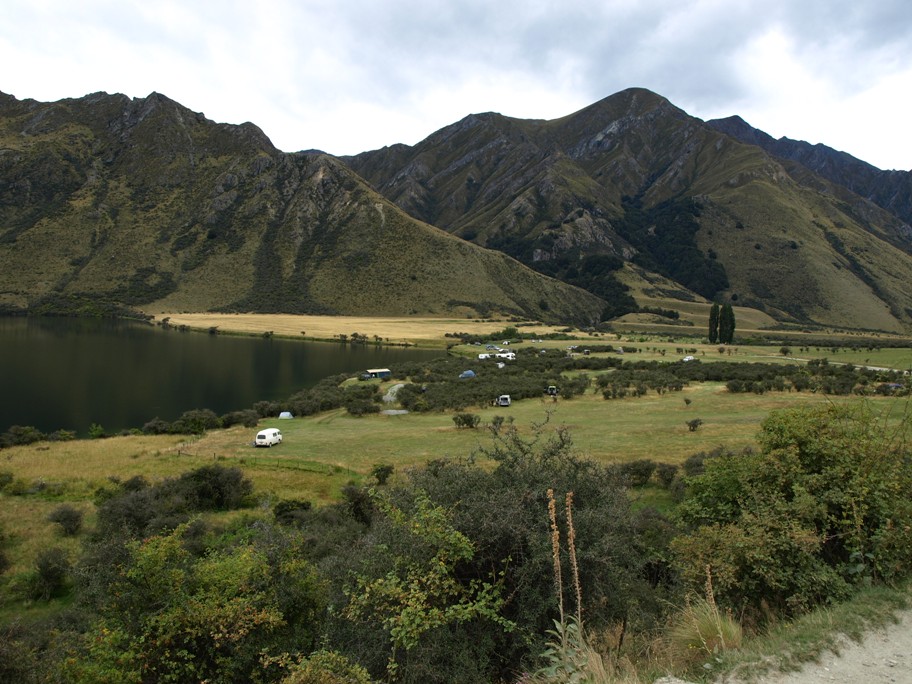 We had a very peaceful night.  I was expecting total darkness too but the moon was full so it was still very light even at midnight!  We had no electric hook-up of course so couldn’t use the laptop to watch a film or anything, also there was no Vodafone signal out here whatsoever so we couldn’t even check emails etc but we did have a newspaper so spent a couple of hours doing crosswords and word puzzles together, it was great fun.  We do have a really great battery powered lantern which we purchased at the start of our travels in the campervan.  It’s a really good one and we are going to see if we can get one for the boat when we get back home.

This morning, just as we had finished breakfast, Mr Ranger came round to collect the camp fees. Normally we pay anywhere between $30 and $40 (approx £15 - £20) a night on a campsite, this one cost us the princely sum of $14 – brilliant!  OK so there are no facilities, other than the dunny but never mind.  One of the things we were absolutely delighted about was the fact that the fridge had stayed on all night running purely on battery power. We had placed the frozen freezer packs in the body of the fridge to help keep everything fresh in case the power went off in the night and were very surprised indeed to find that it hadn’t! 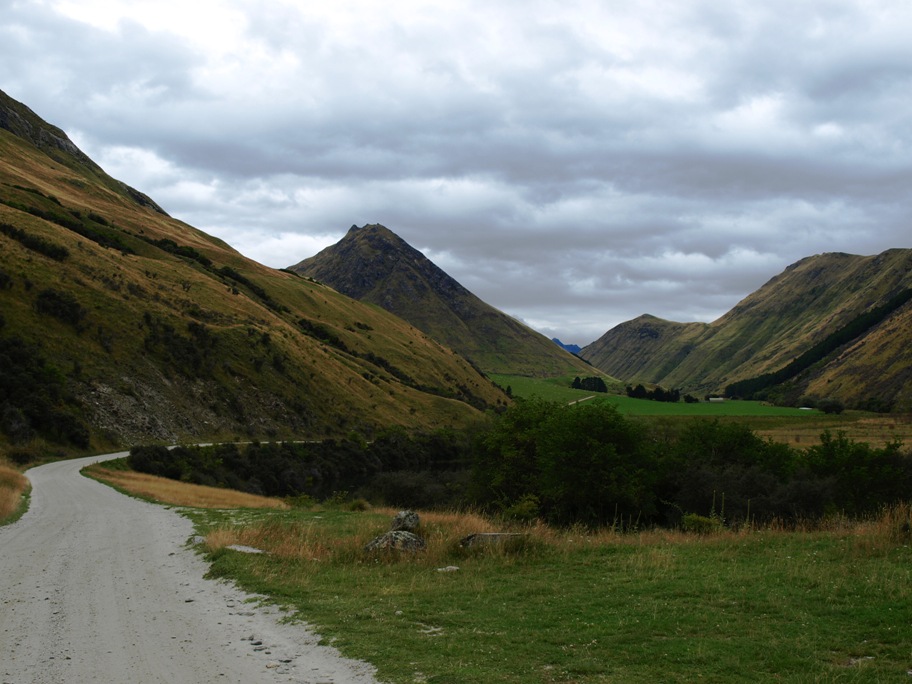 Heading back to Queenstown on the road from Moke Lake

We drove back into Queenstown and made use of the public conveniences in the town centre, which are a bit more pleasant than the dunny and also have hand washing facilities! Unfortunately the weather has really taken a dive today, its raining, quite heavily!  So we decided to checkout the new campsite on the leaflet.  It is actually on the same road as the rented house that Vicki lived in when she was here in 1999!  We checked in straight away and as it was raining so heavily we’ve stayed put.  Clive is now in the TV lounge whilst I’m here in the van blogging!  However we are thinking of going to the cinema later – can’t decided what to see though!  We want to see both 127 Hours and The King’s Speech, think we might have to toss a coin!!